Second full week done!  I had a bad back day on Thursday, so we got behind a touch in a couple of lessons, but it won't be much work to catch back up.

Grammar: Finished Lesson 9, this is one that we fell behind in because it wasn't something he could do on his own, although, now that I think about it, he probably could have done it on his own.  Hmm.

Writing: Almost finished Week #2.  Fourth lesson of the week needs to be made up.  Dictation was NOT a happy time this week.

Penmanship:  It's cleaning up really well.  He regresses when he's upset, and then gets really upset when I ask him to erase his sloppy work and do it over.  But you can't let kids think that they get a free pass on doing poor work because they're upset.  Probably one of the hardest parts of homeschooling--insisting on neat, good work even when your child is getting upset.  (And for the record, he was upset because he wasn't going to finish by lunch that day because he'd been messing around all morning.  Them's the breaks, kid...) 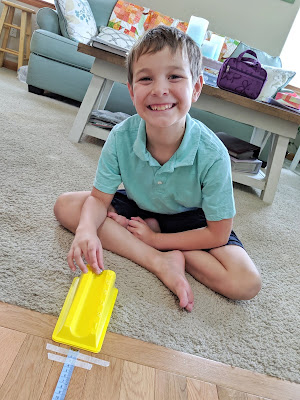 Science: We did two days of experiments, which he really enjoyed.  Both of them were about force and mass and gravitational pull via measuring how far a steel ball will roll after going down a ramp.  One was about energy transfer, too.  I really like this Delta Science kit.  The hard part is deciding which other two (or three?) kits to limit myself to throughout the year... 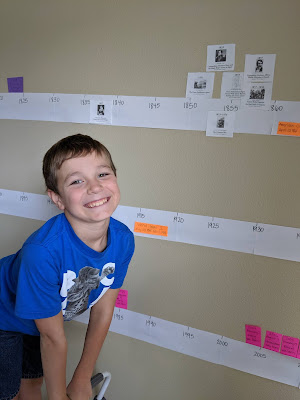 History:  In order to free up extra time to focus on some hobby topics, the American Civil War, World War 1, and World War 2, some weeks we have to just mash chapters, and this was one of them.  He did both chapters two and three out of SOTW, and they really weren't interesting to him.  Whatever, they're over now.  He does really enjoy adding things to his timeline though.

Latin: We just went ahead and started on Lesson 1.  I got him set up with an account on AnkiWeb* to create flashcards, and we'll just do our best.  I actually helped Emily and Ren gut/declutter/deep clean their bedroom today and was absolutely certain that we'd find the Latin DVDs in there, but we didn't.  Ugh, ugh, ugh, I don't want to buy another set of them!  We'll see how far we can get without 'em.

Art:  Got a little more technical this week and he didn't like it.  He threw away his drawing right after he was done, or I'd show you the cylinders and bowls he practiced, which were totally great for a nine year old's efforts.

Nature Study:  Nothing formal, but for recess on rainy days we'd walk around the neighborhood and I taught him the names of the plants growing in our neighborhood.  It always made me feel super smart to know the names of  plants near where I lived, so there you go.  (Also, I've forgotten the names of a lot of plants around here...)  He also helped me clean out the garden during a recess, which really had him enthused: 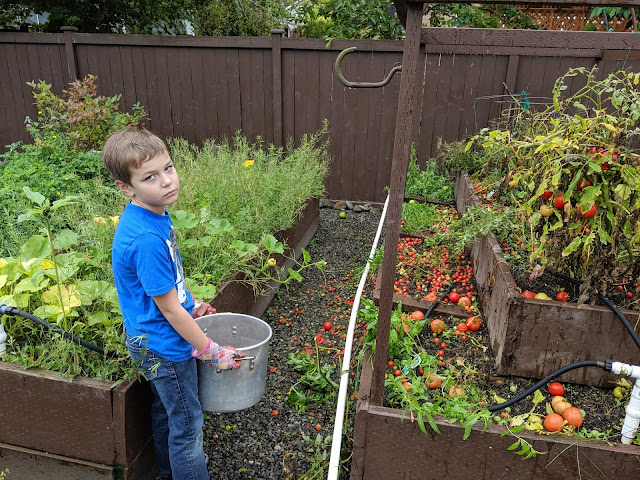 Scouts: We didn't work on anything at home. 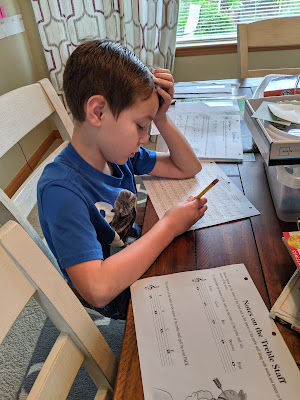 Piano:  Oh my goodness, it was a rough week.  This kid has such a perfectionist streak to him and it gets ugly.  I'd noticed that he didn't seem to be getting stuff checked off in his lessons, so I sat with him on Monday to help him stay focused and get through all his assignments.  There were tears, there was hitting the piano with his pencil, there was an epic hug afterwards while he calmed down...ugh, it turns out that he was just practicing the same safe songs over and over again because he didn't want to work on stuff that was more difficult.  I'll have to keep an eye on him for a few weeks until we break that habit.  Joy of joys.

All of the rough stuff this week?  Really boils down to what I call the "intensity of homeschooling"--namely, that you can't zone out, or not raise your hand and allow someone else to sit in the hot seat for the correct answer.  You have to be paying attention the whole time and there's no hiding behind other kids if you don't feel like participating.  He's a really clever kid, but I think he was zoning out in class after he figured out what was being taught, and, because he's a clever kid, he might have been left alone because he wasn't making any trouble and he obviously knew the material. This is harder, and it takes a bit of an adjustment period.

Soooo...yeah, a long week.  Nothing terribly bad, but it did drag, the weather was somewhat yucky most days, and we were pretty happy to put away the books once Friday was over.  I need to brainstorm some fun things to do with him--once his sisters get home from school there's really no time for any of that because I'm then running around picking them up and dropping them off at their various extras.

But that's how it goes some weeks!  And rather than end on a sour note, look at this great shot of him from our nature walk last week, simply because I love the lighting on it: 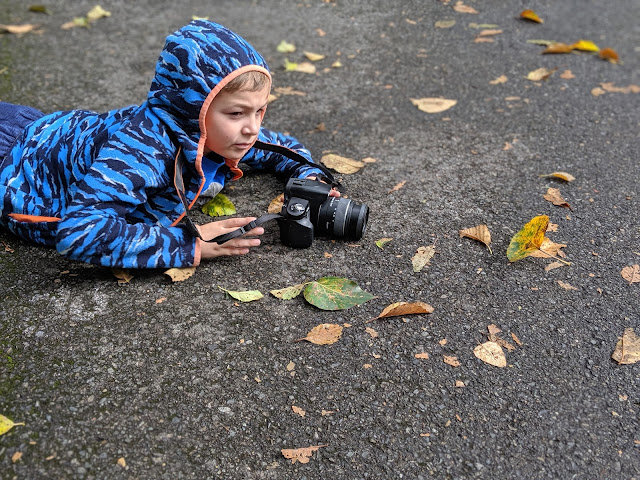 Fingers crossed that this next week is a little more enjoyable for him!

*I found out about AnkiWeb when I read the really informative book, Fluent Forever, by Gabriel Wyner. If you've ever wanted to study a foreign language, I really recommend it for a different approach that is very doable on your own.