Only three weeks left of school!  I am so giddy over that fact.

I'm torn between trying to report on the past twelve weeks of school, or just throwing that to the wind and focusing on this week.  Seeing that I don't have a lot of photos from this week, I think I'll go with a general re-cap, kid by kid. 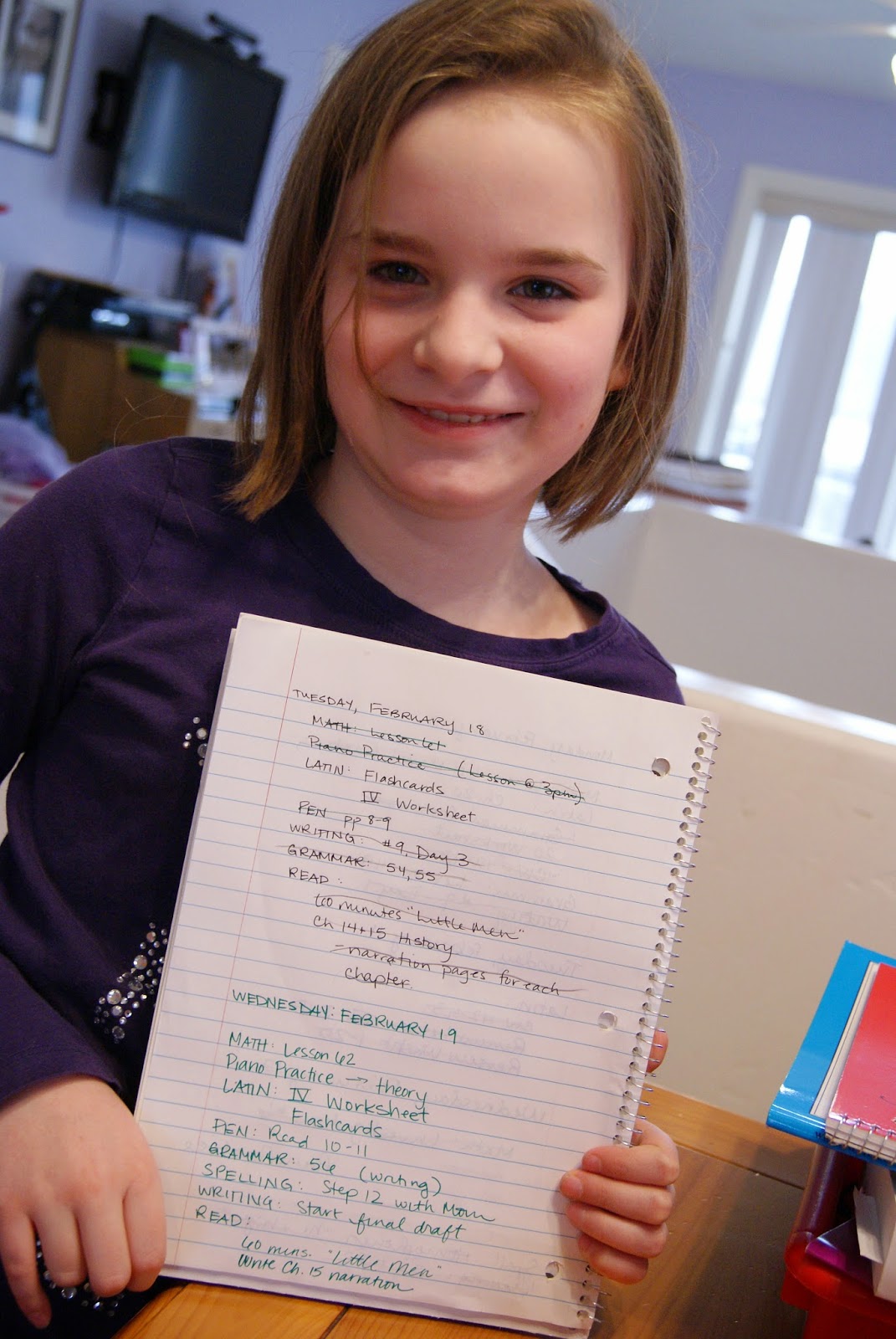 We're nearing the end of the fourth grade, and I've been trying to give her a little more independence in order to prepare for the slightly more independent nature of fifth grade.  The idea has its successful days and its not-so-successful days.  I teach very few lessons to her anymore, just math and spelling for the most part.  She finished her fourth grade grammar book on her own, with the exercises done very well, and she does well on her Latin tests each week.  (Thank you!)  It's working; I just have to check in on her a lot during the day to make sure she's not daydreaming or working on something not related to school.

We do her math lesson first thing in the morning, and when that's done we sit down and I write down all the things she needs to do throughout the day, including notes about whether or not she needs to do that particular assignment with me.

Reading-wise, she's finished Little Women, Little Men, Black Beauty, and A Little Princess.  She will start The Secret Garden next.

She's also started some athletic endeavors, after I got fed up with the kids lolling about and playing video games non-stop whenever they could.  She's now attending a gymnastics class once a week, and she's signed up to be on a fastpitch team this summer, which is currently holding practices twice a week. 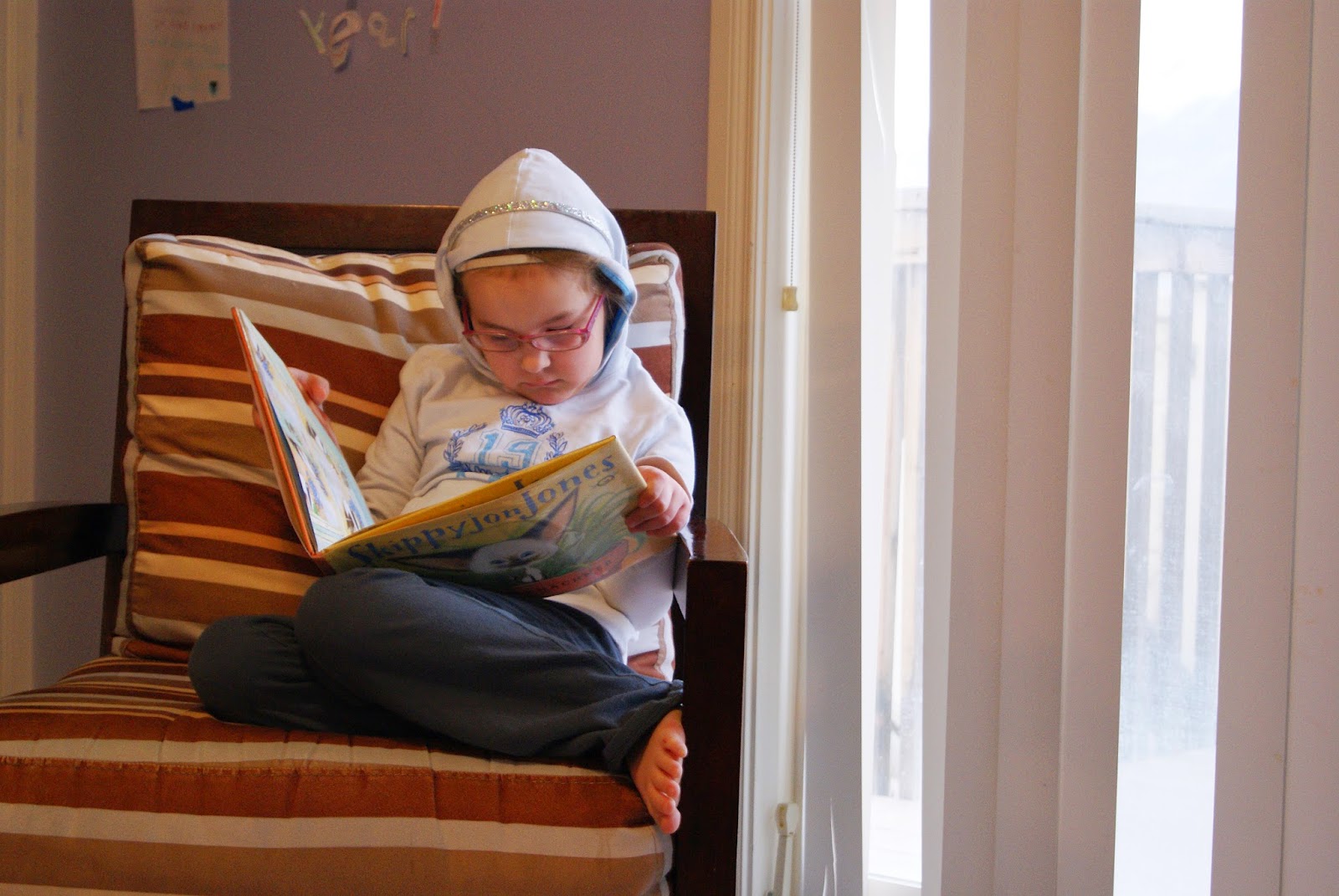 She's my little trucker.  She shows up, she gets through her work, she goes off to play.  Such an easy student to teach.

She's read abridged versions of Little Women, Little Men, Black Beauty, and The Secret Garden.  She'll start her abridged version of A Little Princess next.  I walked in on her reading Harry Potter and the Order of the Phoenix a month ago; I hadn't realized she'd even read the first four books of the series, but she has.  It's so rewarding to see them enjoying their free reading.

She's busy with gymnastics, too; and she's in the last weeks of spring soccer.  It was her first time playing soccer, and she was blessed with an awesome coach.  She went from kind of not being able to kick the ball at her first practice, to a perfectly acceptable player in these past few games.  She's become a little more aggressive during the games, and she's even "attacking" the ball sometimes, which is a far cry from the girl who would step out of the approaching team's way as they kicked towards the goal.  Sweet girl.  Her coach says he loves it when she has a chance to kick the ball because it's a full body action on her part, and it's true--every muscle from her face to her toes is involved in kicking the ball.  It's adorable. 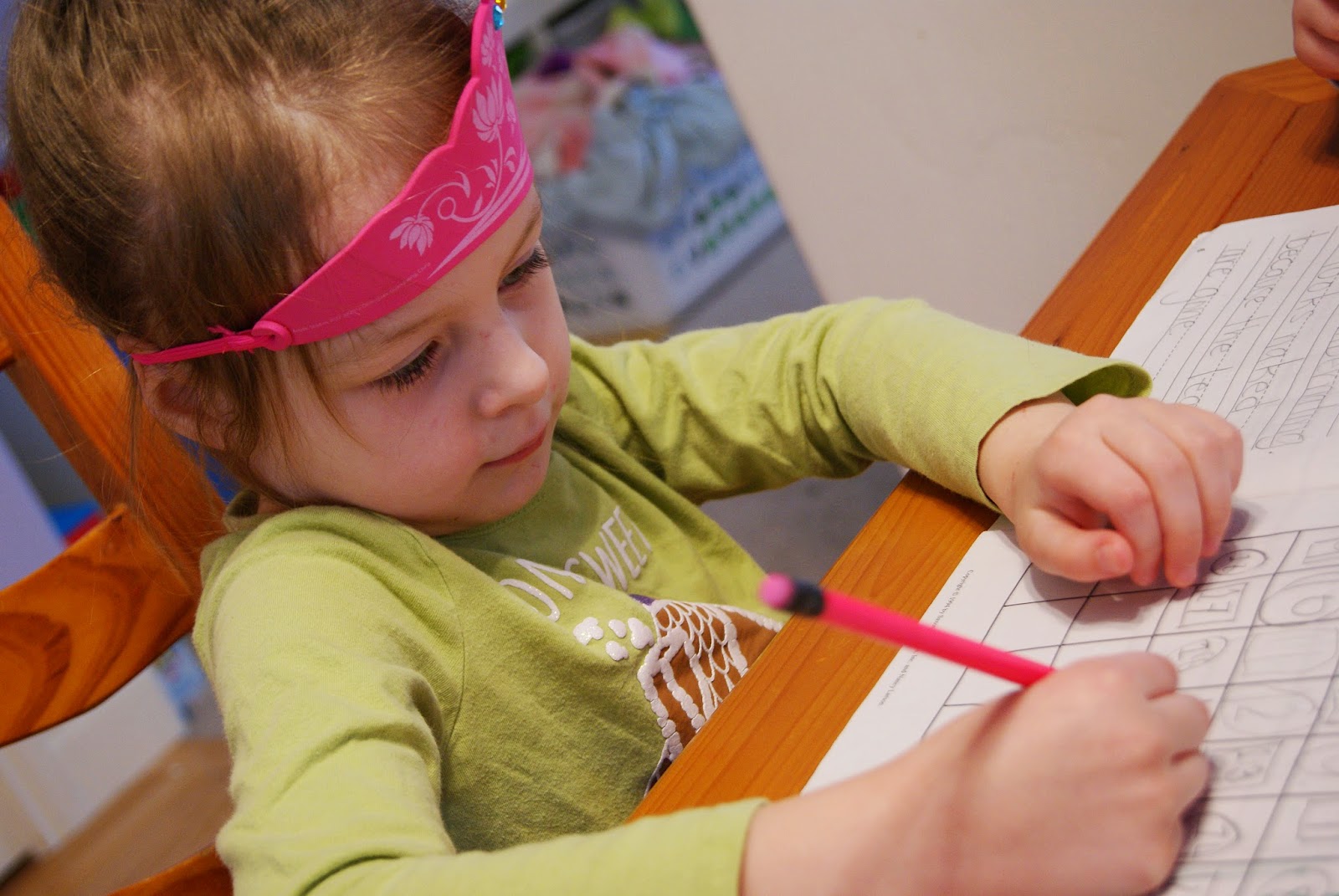 She's progressing nicely.  She's ahead in math and penmanship, and reading is becoming a little easier for her.  She doesn't like to read, so it's coming along slowly.  Fortunately, I've already raised two daughters who didn't like to read either, so I'm not worried.  Looks like I need to prepare another read aloud-heavy summer.  That's always solved the problem in the past.  You just gotta hook 'em onto reading something extremely enjoyable, and it all grows off of that.

She's not doing any sports right now because she was absolutely convinced that doing a sport meant that she wouldn't be able to attend art camp this summer, and I couldn't make her see reason.  Whatever, she's only six; we'll do sports after art camp ends. 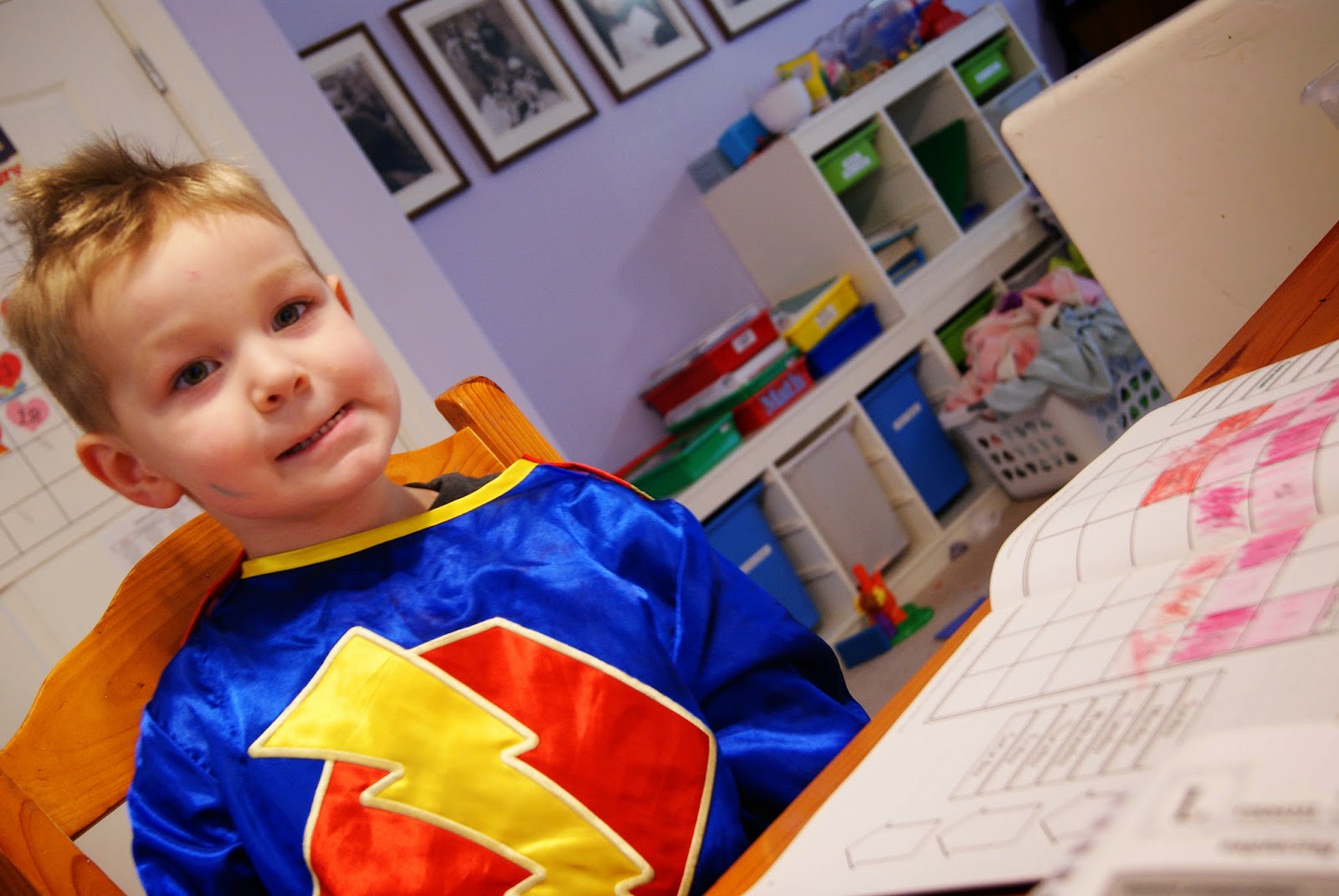 I try, I really do.  His "school" gets pushed to the back burner a lot, simply because it's preschool and I've never been that big a fan of structured school for kids as young as him.  Fortunately, I have a handful of little girls who love to show off their reading skills to their younger brother, so I'm taking advantage of that.  He starts off each morning doing some form of art while listening to our devotional, and we try to do a math lesson twice a week.  I feel pressured to do some phonics work with him, and I'm trying to find time for it.

He's signed up for tiny tots baseball later this spring, and Michael has been scouting around for wrestling clubs that accept boys this young.  I guess we'll see.  Monkeyboy is really excited about playing baseball--he asks me at every single one of Penguin's soccer games if he has his baseball game after her game ends.  Oh, my boy, you are so precious!

I've ordered their end-of-year tests and scheduled time for testing at the end of May.  That extra long summer vacation we took last year has really caused problems in regards to finishing up on time.  I think we'll have a couple of weeks of schooling during our summer break.  I'm kind of bummed about that, but it is what it is.  I took this year's summer break already...last summer.  We'll survive.

I've flirted heavily with the idea of sending them to public school next year.  I love the idea of a sabbatical year, and next year will be the seventh year of schooling.  We toured a local charter school, but I just couldn't bring myself to fill out the final application forms; and now my eye is upon the regular public school all the kids in our neighborhood attend.  However, I do not like the math curriculum.  At all.  And the literature selections are far below, and far less, than what I'm giving my children already.  I can either just shrug my shoulders and say, "It's just for a year," or put my head down and continue on with the way we've been doing it.

Ironically, as I've been casting my gaze upon the public school system, five different mothers in my neighborhood approached me to gather information about homeschooling their own children.  My thoughts are a blog post in itself; I generally lean towards discouraging taking that step because so many people who pulled their kids after talking to me just don't do school, and end up sending their kids back the next year, then a year behind.  I refuse to encourage anything of the sort, so I tend to focus on the rough parts because almost everyone else focuses on the warm and fuzzies.  It's a lot of consistent work, by yourself, every day, with "reward moments" sprinkled in few and far between.  If you're not the kind of person who can get out of bed each morning, then it's probably not a wise choice.

Interestingly enough, one of those mothers agrees with me, and she was thinking about homeschooling because she can't stand the math curriculum either.  And then she paid me the best compliment I've received in a long, long while:  She asked if I would educate her child.  Because my kids are turning out well, and she wants that for her child, too.  I walked on a cloud for almost a week after that.

Why can't she just do it herself?  Well, she runs an at-home preschool, which needs to keep running.  As a result, she has suggested a trade:  I school her fourth grade (next year) child, and she'll do preschool for Monkeyboy.  It may not seem like a fair trade to most people, but it's an answer to my prayers--plus, Monkeyboy could hang out with one of his favorite kids from church, who also attends the preschool.  I've decided to do a trial run over the summer and see if it works out for all involved.  (And don't worry, I'm aware of State Law on this facet of homeschooling, and it's legal to educate another person's kid in our state...in fact, it's even easier now that Utah passed some awesome homeschool legislation!)

So my head is just chock-full of homeschooling-related topics.  I've missed being able to talk about them here.  Even though I haven't blogged in many weeks, my brain still keeps "writing" posts throughout the day--I keep trying to figure out how to word something later on for a post.  It doesn't stop, which is slightly maddening.  It's good to be back.

If you could find some time in your prayers to remember me and my family, I would appreciate it.  We've got lots of big decisions weighing on us, and I just want to make the best decisions possible.  Thanks, and happy spring to you all!