It's hard to have a big, celebratory "First Day of School!" when you school year-round.  We just finished up last year's schooling in May, and now we're starting up again just six weeks later, which doesn't give me time to plan some elaborate Back-to-School activities.  (We actually have a whole lot more fun with "Not-Back-to-School" celebrations during the week that our public school district starts school!  It works better for us.)

Yes, we have started a new school year.  I'd gauge our week at about a 75%, as I didn't want to just jump in and drown my kids in new subjects.  Penguin is entering the ranks of full-time schooling, so I went a little easier on her as she adjusts to doing more than three subjects, and Bluebird...well, the girl has a strong will, and I've learned not to poke the crazy too much in the first couple of weeks. As mentioned before, Penguin is starting in on full-time school, which means that, in addition to her regular Math, Penmanship & Phonics, she now also studies Spelling, Grammar, Writing, History & Science.  (And all the extracurriculars, but she was already participating in those subjects to some degree.)

Bluebird is starting the third grade, which means Latin!  Our curriculum won't arrive until this next week, and then I'm going to spend a few days getting familiar with it, so we'll start actual Latin lessons in Week 3.

This week, we read a children's adaptation of Don Quixote; which we didn't really enjoy, but didn't hate either.  It was just something we read.  I've tried to read the original a couple of times now and just get overwhelmed by the length.  It was nice to finally read the stories inside that tome.

We studied the Spanish conquistadores and their glutting of gold from South America, and we're also scheduled to do a read-through on Mary, Queen of Scots this afternoon.

Science will be done tomorrow.  It will just be a brief introduction to the history of chemistry, no experiment scheduled. 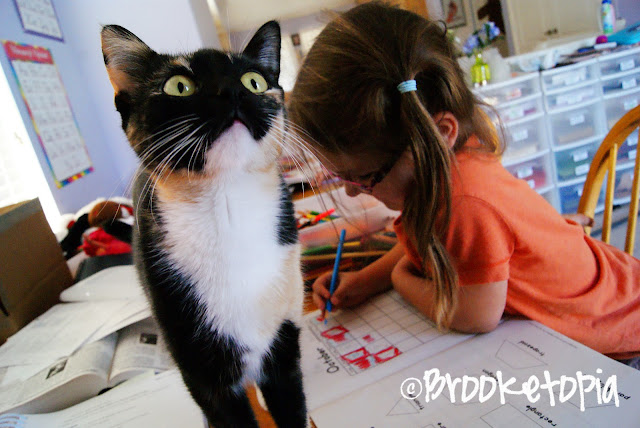 Quesnel is jealous of Penguin's full-time schooling.  The two share some weird spiritual connection and are always together, and this week marked the beginning of Penguin being unable to cuddle with Quesnel for most of the day.  Quesnel has taken to sitting on the homeschool table in front of Penguin and just staring at her while she does her schoolwork.  It is one of the weirdest things to witness.  Quesnel has also become very whiny whenever Penguin goes outside to play in the backyard, and she just sits at the back door mewing pitifully.  She's lost her monopoly on her best friend to the inevitable responsibilites that accompany growing-up.  I include it here as a funny, but it's actually sort of sad to watch this poor cat's world turn upside down.
Sorry, Quesnel.  At least Penguin is still home each day, instead of away at public school.  (I imagine the cat would OD on catnip if it came to that.)