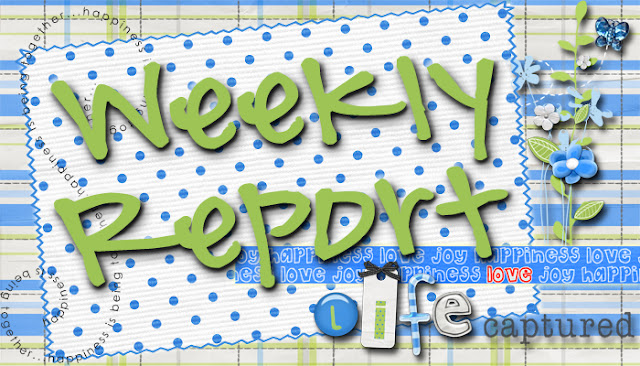 I don't know about you, but I get to the time of day on Friday where I ﻿can sit down to write up our weekly report, I'm pretty tuckered out.  Fun Fridays are a serious investment of time and energy!  I used to try to sprinkle the extracurriculars throughout the week, but they were never completed because by the end of a normal school day I just didn't want to muster up the energy needed to do any sort of extracurricular activity.  So I put them all together and the girls are just so incredibly excited for Friday that I can't help but be excited for the chaos as well.  Life is good.

We completed EVERYTHING scheduled for the week.  (Well, except for that second bonus Science lesson...and we're not technically done with our Literature read for the week, but I forecast that being finished up this evening.)  It feels so good to check everything off the list for once!  Yay!
Math:  All four lessons for both girls.  Mostly AB patterns for Penguin and counting by tens for Bluebird.
Reading:  Moment of Triumph: Bluebird finished Phonics Pathways this week!  It's been a long three years, marked by long periods of non-use, but it's done!  I'm treating her to lunch and a trip to the bookstore this weekend in celebration.
Another Moment of Triumph:  Penguin sounded out her first words this week!  I foresee some time spent with the Bob Books in the next week or so.  (Yes, I find it ironic that I'm so excited about finally finishing up Phonics Pathways only to be starting it at the exact same time with the next child.)
Writing:  Thank you notes for Christmas gifts.  Late start, but at least they're getting done.  Penguin has insisted on writing one or two herself...she only signs her name, but she tells me what to write.  So cute.  She's also started writing out family members' names and posting her penmanship around the house.  It's not bad at all, I'm quite impressed.
Bluebird will start on her formal writing program this coming Monday now that she's done with Phonics.  (She's not happy about this development.)
Grammar:  Bluebird can point out the nouns in sentences!  She also memorized two more poems this week:  "Hearts Are Like Doors" and "Days of the Week."
History & Literature:  We studied the Phoenicians this week.  This was a fun week for us.  We read In Search of a Homeland: The Story of the Aeneid by Penelope Lively, which I need to recommend.  It's very good.  It's taken us all week to read it, averaging about 23 pages a day, but it's been worth it.  It's been so fun to talk about the adventures of Aeneas and have Bluebird rattle of names like Odysseus, Dido and Iulus.  (And we won't go into how dumb I felt about learning so much from a children's book...) 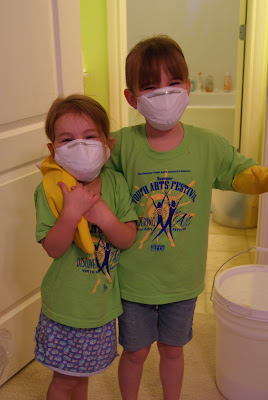 The Phoenicians were famous for their purple dye made from snails, so I thought it would be fun to have the girls dye some dresses purple.  I'd been watching for snail dye for months, but it's been out of stock all that time, so we had to settle for regular clothing dye...we chose "Imperial Purple" because purple-dyed garments were so expensive back then that only royalty could afford them. Science:  Mixtures.  Oil vs. water and all that stuff.  I don't really want to talk about it because it turned my table into a greasy mess and Monkeyboy would not stop crying through the entire experiment, which upped my stress level to the point that I yelled at my dear Penguin when she jumped up and down in her chair, nearly spilling the melted butter and oil cups on me.  It wasn't a warm and fuzzy experience and I still feel bad when I think back on it.
Art:  We learned what portraits were and drew some portraits with watercolor crayons.
﻿ ﻿
﻿ ﻿
Girl Scouts:  Bluebird earned her "Honest & Fair" petal and then surprised me by stating that she had also been working on earning her "Use Resources Wisely" petal in secret.  She then told me all sorts of ways to conserve resources, recycle things and just "be smart about what you use."  (Sometimes I just look at her and think, "You are so awesome!  I love being your mom!")  She has decided to work on earning one of the "Respect" petals in this next week.
Tomorrow marks the beginning of Cookie Season...we've got some door-to-door scheduled in the afternoon, yippee.  She wants to sell 250 boxes this year to help pay for camp and earn free admission to the Cookie Party in June.
Music Appreciation:  "Dido & Aeneas" by Henry Purcell...duh!  We haven't actually done this yet, it's scheduled for today after Rest Time.  I'm looking forward to it.  I had a minor role in the opera when my University put it on many years ago, so it's a sentimental selection for me.  :)  It's going to make a whole lot more sense now that I've read (the children's version of) The Aeneid. 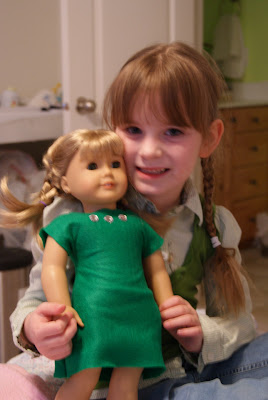 And that's it.  Except for all the crazy churning out of sewing projects that Bluebird has accomplished this week.  Excuse the pun, but that girl is a sewing machine!  I've decided to allow her to start up her own blog showing her various projects because if I let her post about them here you will never read about anything else that happens in our family again.  (There are no posts on her blog yet--that's a task scheduled for this upcoming weekend.)
Highlights of the Week:
Lowlights of the Week:
Funnies of the Week:
Posted by Cara at 4:16 PM