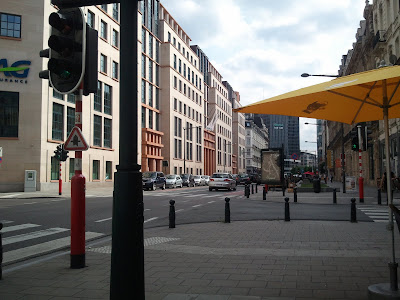 Michael had to go to Belgium for ten days last week for work. While he was there, he tried to fit in a little shopping and sight-seeing. He took this picture one afternoon, and when he was done a woman sitting underneath that yellow cafe umbrella began talking to him.

Figuring that she misunderstand him, he asked her what language that was. "Your language," she replied.

"But my language is English," said Michael.

"I still speak your language," she told him.

Frustrated, he retorted with, "But I speak English."

She replied once again with, "I speak your language."

They went back and forth with this dialogue a few more times before Michael finally asked, "Well, what language do you speak?!?!"

"I speak the language of love."

It was then that he realized that she was giving him a rather seductive smile, and shimmying her shoulders each time she said "your language."

She was a prostitute.

Realizing his precarious situation, he simply said "Ohhhh...uhhhh...no thank you...I'm going to go now," and quickly got away from her and her two giggling comrades.

I laughed and laughed when he told me about his encounter and pointed out that his experience showed yet another perk to learning another language--you'd know if you were being solicited by a foreign prostitute!
Posted by Cara at 12:00 AM