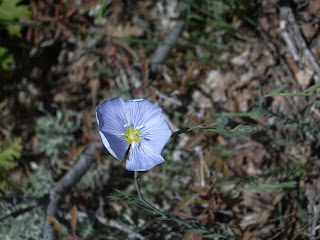 Common Flax (Linum usitatissimum)
From my wildlife guide: "Common Flax is one of the plants upon which civilization was built. Prehistoric Swiss lake dwellers made rope and fishnet from it fibrous stems and ate its oily seeds. It was made into fabric to wrap Egyptian mummies and to clothe ancient Chinese nobles. The Romans called it linum, from which developed such words as line, linen, lingerie, lint, and linseed oil (the basic constitutent of linoleum). The American Indians used several native North American species, such as Yellow Wild Flax (Linum virginianum) of the East and Midwest, for many of the same purposes." (403) 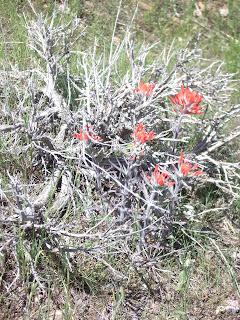 Giant Red Paintbrush (Castilleja miniata)
I wish I had written that this is what I thought it was, then you would be amazed at my nature smarts. But alas, I did not; perhaps next time. 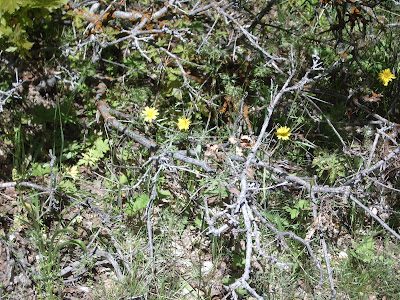 Yellow Fleabane (Erigeron linearis)
Ooh, this was a tricky one to identify. I originally pegged it as a Golden Aster, but then felt like I needed to keep looking because of its singular flowering habit. Lo and behold, I came across Fleabanes. From the wildlife guide: "Fleabanes are often confused with asters, but they tend to be smaller and weedier and usually bloom earlier in the year." (450)

My wildlife guide may seem an odd choice to you, but it's the Reader Digest's North American Wildlife, edited by Susan J. Wernert. It's older, the original having been written in 1982 and this revised edition having come out in 1998. But this was the book I had in my home growing up, and I spent hours leafing through its pages and learning about wildlife. There are color illustrations of each specimen (Mammals, Birds, Reptiles/Amphibians, Fish, Invertebrates, Trees/Shrubs, Wildflowers, Nonflowering Plants, Mushrooms), along with maps of where you tend to find them in North America, and all sorts of identifying characteristics. Even now I still like poring over its pages, and Mr. Brooke was very impressed by its quality and thoroughness. I love this book!
Posted by Cara at 6:05 AM