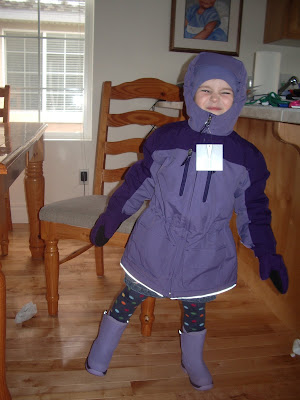 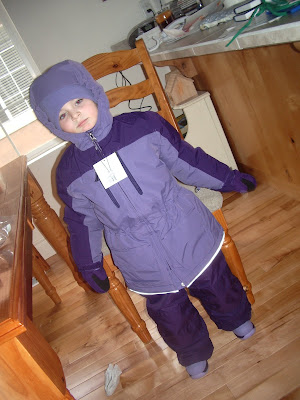 Note to self: Buy snow clothes in September (when all the catalogs come out with their snow clothing lines) so I can get the best selection. Pink snowpants were not available, so we had to settle for purple instead. (I think she's OK with it, despite the picture--my battery ran out so we have to go with it.)

Another note to self: It would be much cheaper to buy next year's snow clothes at the end of this winter season. But I've been reminding myself of that for a long time.

We all have snow clothes now. (I bought Mr. Brooke some stuff too, even though he's given the impression in the past that he thinks snowpants are a waste of money, something about spending money on pants that you can only wear outside for only one season of the year.) It's worked out nicely because it's been cold and rainy, but that kind of weather no longer deters us from our outdoor ventures. It is so nice to walk outside and not want to curl up into the fetal position in a vain attempt to conserve body heat. Life in Utah is about to get much, much better for us.
Posted by Cara at 4:54 AM