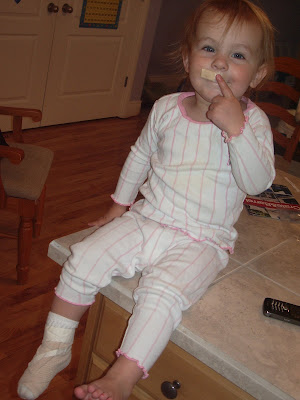 This girl is just plain accident-prone! She's had her foot wrapped up for what seems like weeks. Nothing serious, I've just found that it's the only way to keep a band-aid on her foot. First she stepped on something outside that cut her foot in two places; and then when that healed up and I began enforcing wearing shoes while outside, she tripped on Mr. Brooke's air mask and it sliced into her big toe! So more foot band-aids (Barbie and Diego) and elastic bandaging.

I had just finished bandaging up her foot after her bath last night (which is quite the ordeal, considering that hydrogen peroxide is involved...) and she was off playing by herself when she started screaming bloody murder and I took off running to find her. I found her sitting on the couch downstairs, blood smeared all over her face and her pointing fearfully at a ballpoint pen. Deductive reasoning concluded that she was jumping on the couch with the pen in her hand and she fell down on it and the pen neatly gouged into her upper lip. I ran her upstairs to assess the damage (mentally berating myself for not keeping a closer eye on her and thanking God that it hadn't gone into her eye) and found that the wound was shallow and not very big, but quite the bleeder. More peroxide, more struggling, more screaming, more band-aids.

She and I went on a jaunt down to K-Mart to restock our first aid supplies and I bought her some new crayons and a coloring book to brighten her spirits. Hopefully the coloring book will keep her out of trouble and I highly doubt she can draw blood with a chubby crayon.

Email ThisBlogThis!Share to TwitterShare to FacebookShare to Pinterest
Labels: Pictures