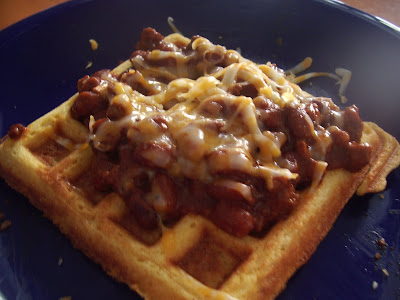 As previously mentioned, we eat waffles for dinner every Wednesday. The girls and I really like them, but Mr. Brooke isn't exactly excited about the tradition like we are. So I got to thinking about ways to make Waffle Wednesday better for him--and it occurred to me that waffles don't have to always be sweet. Savory waffles...hmmm.

I figured I'd start the experiment with nice, safe cornmeal waffles and Mr. Brooke suggested we serve them with chili on top. Not that different than eating chili with cornbread! (I also had a dollop of sour cream on top of mine...) The experiment was a success! Now I've got to come up with other ideas for savory waffles...I'm batting the idea around in my head of a lemon-sage variation. 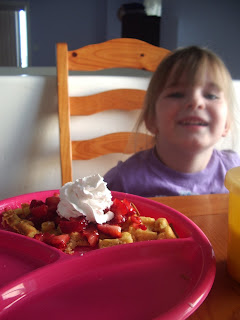 The cornmeal waffles also passed off nicely as sweet waffles for the girls. However, I've got to find a different recipe for cornmeal waffles, as mine took FOREVER to make! (I had to whip egg whites, for crying out loud!)
Posted by Cara at 7:02 PM