More Thoughts on the Argyle Scarf 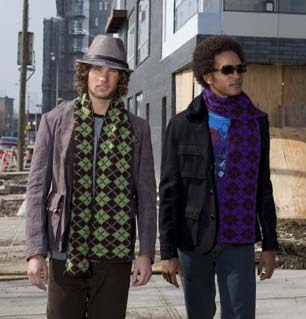 I've done some massive googling on this thing. It's the scarf on the cover of
Son of Stitch 'n B*tch, and I'm quite fond of it. The book is centered on knitting for men, so I originally was thinking to make it for one of my cousins, but Ashley effortlessly persuaded me to knit it for myself. (Perhaps as a "Good job on allowing your body to once again go through all the discomforts of pregnancy, here's a scarf to thank you for your efforts!" sort of reward?)

In my research, I have been able to read some very good reviews about what the book contains and I am SO GLAD that I did not purchase it. Knitted beer bottles, a dead bear with a honeybee drinking its blood, lots of skulls on stuff...I'm thinking NO. Oh, and the clincher for me--a scarf with a silhouette of a pole dancer on it. No thanks. But that argyle scarf--I have to make it.

It's called the "Uncle Argyle Scarf," and it calls for Cascade 220 yarn, which is a worsted weight yarn. The kicker, though, is that this thing is double knit; which, to all us beginner and non-knitting folks, means that you knit two sides at once. I have never attempted this, and I wasn't even really sure the technique existed before now, so I'm a little scared of the project. Not to mention that it's argyle and I'll have to juggle the two colors...this thing will be a challenge. It will take a very looooong time for me to complete, especially when my world turns upside with the addition of Little Lamb.

I'm thinking I'm going to go with a light and dark shade of pink for my colors. There's something about making a scarf intended for men out of the most girliest colors ever that makes me rather happy. (And perhaps a trifle smug...) And I've wanted a pink scarf for years now.

Hopefully it won't take too long to get the book through Interlibrary Loan.
Posted by Cara at 8:11 AM

Email ThisBlogThis!Share to TwitterShare to FacebookShare to Pinterest
Labels: Knitting