The blog went offline at the end of November and we've been a busy bunch of folks in the interim.

I caught a flu-like bug at the beginning of December and sent Mr. Brooke to the grocery store to do the weekly shopping for me, and he came home with this: 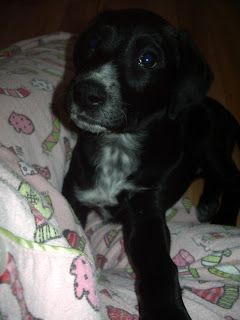 Part of the grocery list was to buy a sled and when he went to the ranching store for said item, someone had a box of puppies outside. He passed them by on the way in, but as he and the girls were picking out the sled he kept having visions of pulling the girls in the sled while a cute puppy frolicked about in the snow. And thus we became dog owners, again. I was in bed when they came home and Mr. Brooke peeked sheepishly around the door and said, "You are going to be SO mad at me." Bluebird rushed in and exclaimed, "We got a sled AND a puppy!"

Her name is Holly because, on the trip home from the store with her, Bluebird was holding her and looked up at Mr. Brooke and said, "It's snowing today and that means it's Christmas time, so this is a Christmas dog and her name should be Holly." You can't argue with logic like that! So, friends and family, meet Holly the dog. Obviously Labrador and we're thinking she's mixed with a little Heeler, which definitely cuts down on the spazziness of a purebred. Unfortunately, the girls and I have had allergy-like symptoms since Holly came to live with us; Bluebird is scheduled for allergy tests in January and we'll find out what's going on from there.

Those allergy-like symptoms have had me in bed for almost three weeks straight. I lost my voice for eight days, forcing me to cancel two singing engagements that I was quite excited to participate in. Sad, sad. The doctor said I had a sinus infection and put me on anti-biotics, but I'm thinking that he was a little bit wrong on the diagnosis because the anti-biotics ran out on Wednesday and I'm still not feeling better. Ugh.

But despite the awful feeling of wanting to curl up and go into a coma until I beat whatever bug I'm fighting, we managed to do a few things for the Christmas season. There was a slew of cookie baking (15 dozen), some snow play, a little bit of light-headed Christmas shopping (in which a huge storm blew in and I had to use four wheel drive to get out of my parking space at the mall!), and other cute things: 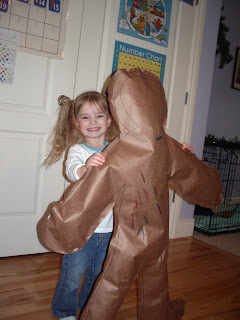 We made life-sized gingerbread men out of butcher paper, which totally blew Bluebird's mind. 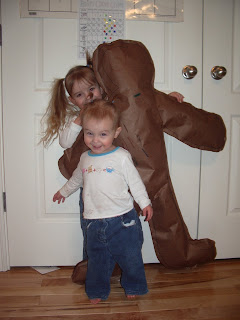 Rabbit has one too, but only wanted to take pictures with Bluebird's. 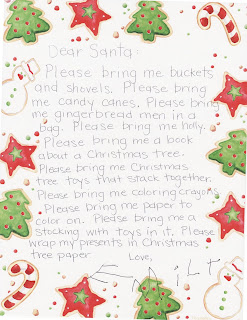 And we spent a few days up at Mr. Brooke's mother's house for Christmas. There are some great pictures from that, but I'm having techinical difficulties with the CD-RW and cannot show you all the fun. I spent 4.5 hours making gingerbread houses from scratch for Bluebird and her cousins to decorate, so they were all up until 10pm Christmas Eve working on those...whew. If I ever get worker-friendly pictures, I'll share them with you.

So there you are, all caught up on your favorite family's doings. Mr. Brooke and I celebrated our fifth anniversary on the 28th with a glorious dinner at McDonald's with the girls and watching a rental movie on the couch. Truth be told, three days after Christmas does not find us very enthusiastic about anything, especially anything requiring the spending of more money or eating more food. We're thinking we'll start celebrating our half anniversary in June so we can at least properly celebrate at some point during the year.

Next on the radar--Bluebird's 4th birthday at the beginning of February. It's looking like it will be a Little Einstein's party. My brain is cooking up some good stuff for this little celebration and Bluebird is obsessed with looking at LE party supplies online. 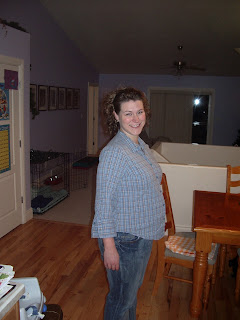 Baby is doing well, measuring a little larger than she should be. Two more months and we'll finally get to meet her...2008 is looking to be a grand year.
Posted by Cara at 2:54 PM 1 comment: Links to this post

Hello blogosphere and cyber friends, I missed you during a much-needed break from online posting. Sorry to have deleted all previous posts, but I really needed a clean break; I needed to be able to think about the issue without knowing that a blog was sitting out there, all un-updated and making me look like a slacker. So *click, click, delete* it went. I completely shot myself in the foot regarding search engines and visitor numbers, but I imagine that I will recover in the long run.

More to come at a later date...things will change a teeny bit regarding content and timeliness of posts, but I hope to keep the same "neat-o" factor that the previous posts had.
Posted by Cara at 10:05 AM 1 comment: Links to this post

Ignore this post, it's just for buttons and stuff that I need a spot for to copy.